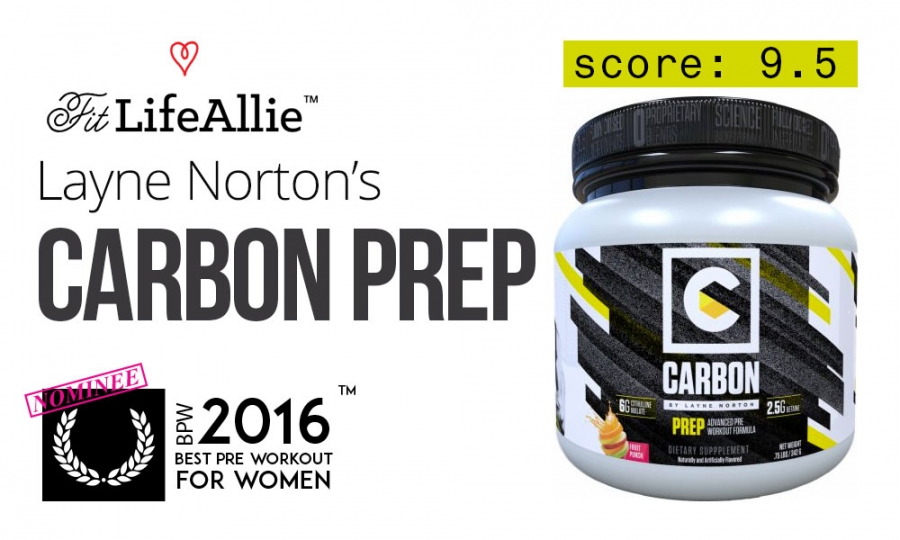 Today I’m going to review Carbon Prep- the new stim-free pre-training supplement from Layne Norton. Stimulant-free pre workouts. This is a topic that I’ll be spending alot of time on heading into the new year and in this in-depth review I’ll tell you why. Needless to say I’m not happy about it. But I figured the best way to start doing some stimulant-free pre workout reviews would be to review the very best of the very best. And so when I heard that the famous Layne Norton was coming out with his own line, you can bet I was chomping at the bit. Hm. That’s such a weird phrase when you think about it LOL. But I really have been. And today it finally came. So in this short time since It has been in my possession I have taken it twice already. Twice!? Yes. Twice because I love it so much I worked out twice with it. I think it is the answer to my prayers. In this review I’ll tell you literally all about it. We’ll start with the flavor, and then cover off on the ingredients as well. As with all pre workout reviews on my blog this will get the full label review as well. So did I like Carbon Prep? You already can tell I do, but keep reading so that you know exactly what you are getting into, because it’s not for everyone, and there may be some placebo going on. But placebo is the best pre workout out there, so, you never know. Alright enough introducing and more reviewing. Here it is folks. Welcome to my Carbon Prep Stimulant Free pre workout review by the legend, Layne Norton.

I don’t know why I never swear in my pre workout reviews but I feel like I might start. I think it would help convey how facking powerfully I’m feeling about something. I mean that’s what swearing does right? And you know what else is weird is that now I’m sweating as I’m talking about swearing. And I’m typing super fast. And I’m having all these random thoughts flying around in my head all at the same time and able to spit them out via the keys on my Macbook Pro. Wow. Do you ever have a moment where your own body and mind shock you? Because I’m having one such moment right now. It’s amazing. That the brain can process things so quickly and translate it into communication that the whole world can read. It’s amazing. And as you read this you’re probably thinking that I’m on drugs. Which I’m not. Always. But I’ll tell you what I probably still am on. Carbon Prep by Layne Norton. I took a little bit of it just now to refresh my mind of the flavor. And I’m telling you right now I love this stuff to death. There might not be anything quite like it on the market right now. Here’s what I love about it (yes, we are starting with the effects and performance FIRST):

Cognitive Excellence: My favorite part about the Carbon Prep by Layne Norton Stim Free Pre Workout is that even despite not having caffeine, this pre workout has an incredible impact on your mind. I’m always hugely in-touch with how these products make me feel emotionally and mentally- basically to a greater extent than the body effects themselves. I know how to control my body. With my mind. If you get your mind right, you can get your body to do whatever the hell you want. That’s why the mental mood and focus side of what Carbon Prep by Layne Norton does is so huge. So what does it feel like? For me, I just feel sharper. I feel like I can translate what I’m thinking into words or actions more efficiently. That’s truly the best way to describe it. You can concentrate better, and have greater control over the body and how it moves. It might sound far fetched, but just trust me on this.

The Second best benefit of Carbon Prep stim-free pre workout is a really good total body pump. An interesting thing about the pre workout industry is that for so long it has been defined by the creatine and caffeine combination. While I have personally enjoyed this duo countless times, there have been interesting studies showing that the caffeine might actually compromise some of the effects of the caffeine. Which is sort of troubling when you consider how many gallons of caffeine/creatine combination have been coursing through our veins for so long. But since Carbon prep has no stimulants aka no caffeine, there is nothing limiting those creatine results. That means the citrulline malate and creatine can flow freely through your body and really open things up for a great pump. I’m usually not a pump maniac. Well, I guess I kind of was after trying White Rapids. But Carbon Prep stim free by Layne Norton DOES give terrific pump and at the same time improving performance.

The last thing that you will notice is just overall performance boost. Sure. You are going to have some people saying, ‘oh this product doesn’t work’ and ‘oh I didn’t feel anything from this product’. Blah. Blah. Blah. You are GOING to get those haters no matter what when you don’t have 400mg of caffeine for the stim junkies. But this pre workout from Layne Norton proves that you can create a super effective performance enhancer without the caffeine. It’s sort of interesting when you think of it because you have tons of caffeine with the caffeine man himself Jym Stoppani, who always seems so high strung. Don’t get me wrong I love his Pre Jym pre workout and even his fat burner too. But I don’t know if ALL that caffeine is healthy ALL the time. I feel like taking these breaks is a good idea sometimes. That’s where Layne Norton’s pre workout comes up big. On a stim-break, this is the pre workout you should get hands-down. You will keep your strength and workout quality at a maximum. Trust me. It works super good for cardio too. But how? Why? Let’s look at the ingredients:

Um. 10, Allie? Yes. I’m giving Carbon Prep one of the very few perfect scores on anything. Yeah. Anything. I don’t think I’ve given a 10 since the taste on the Apollo protein powder. But this is as good of a formula as that is a delicious protein shake. This is like. Really, really good. There is a healthy dose of citrulline-malate, which has become the foundation of almost every pre workout on the market these days since it has the research behind it to boost strength and give that pump. Creatine monohydrate speaks for itself. I like how Layne didn’t try to re-invent the wheel with Carbon Prep pre workout by giving it all the latest and greatest forms of creatine (HCI is super popular now-a-days). Patented BetaPower betaine is a welcome inclusion for those of us lifting those weights. Astragalus membranaceus is an ingredient I’ve never had much exposure to, but reading up on it, I’ve been really impressed by what I’ve found. Astragalus membranaceus is a powerful immune system booster that also can extend your endurance during exercise. I think it’s a super thoughtful addition to this stim-free pre workout. Other awesome ingredients in Carbon Prep include Carnipure L-Carnitine L-Tartarate, Theobromine, and Alpha GPC. Add in some Rhodiola Rosea and you have a very, very powerful energy booster in itself. These are the real ‘engine’ of the formula and are responsible for how crazy-focused and sharp I feel mentally when I take Carbon pre workout. On top of all these amazing ingredients, you have a pre workout that is transparently dosed. You don’t see that very often. Ok let’s talk taste.

Ok so this comes as no surprise that Carbon doesn’t blow you away on taste. I mean. You can’t be perfect at everything, right? If it was up to me I would choose the product that tastes lousy but performs great every single time. As I start to review more stimulant free pre workouts I will be very interested to see if some of them end up focusing more of the research and product development on the flavor to distract you from the fact that they aren’t very effective at boosting your workout. Of course that is not the issue with Carbon Prep. As I’ve described- this is an incredibly effective pre workout performance booster that Layne Norton has created. In terms of that taste. I got the fruit punch flavor. I don’t DISLIKE it at all. Don’t mistake the 8.4 as a bad grade. Because it’s really not. I’ve just been spoiled by amazing tasting pre workouts like EVL ENGN. Which doesn’t really compare to this since it is full of stimulants. I had the fruit punch flavor of Carbon. Carbon Prep by Layne Norton is not very ‘Hawaiian Punch’ tasting, but is really more of a berry taste than tropical in my opinion. It has a nice balance of sweet, salty, and sour. But it’s not something you really want to sip on everyday.

I GET the look that Layne is going for here. I really do. It’s that raw, responsible, ‘look who’s the mature big brother’ who took the caffeine away from the pre workout, look. I get it. And I get the marketing and I get that he’s going to sell a crapload of Carbon because of that. But in my opinion, this just isn’t a very aesthetic package. The yellow and black looks much too ‘contruction-workzone-y’ for me to be attracted to. The big ugly white tub is also just so noticeable that he couldn’t overcome it. You just can’t cover enough of that big old thing. In real life, the label covers even less real estate than in the pictures online. Just so ya know. But. Yeah. I don’t know. What do you think of this label? I just find it unattractive and it doesn’t speak to me. But I’m also a chick. There might be some guys that are going to get hardons for the streaky asphalt look. But know that this is not a deal-breaker for me, much like the taste isn’t. Carbon Prep is a totally solid pre, and may very well be the best stimulant free pre workout on the market right now. On that note, let’s round things up, shall we?

I’m giving Carbon Prep a 9.5, or a 95/100. That’s literally the best a stimulant free pre workout will ever get from me. I promise you that. At $35 per tub, you are getting 20 reasonably priced servings. I mean. It’s a big expensive formula. So nobody is expecting a much lower price than that. The formula is great. The product flat-out works. And the price is right. I call that a winner. Go buy some Carbon Prep by Layne Norton.* You’re welcome, for the review, Layne. Call me. Wink wink. LOL.