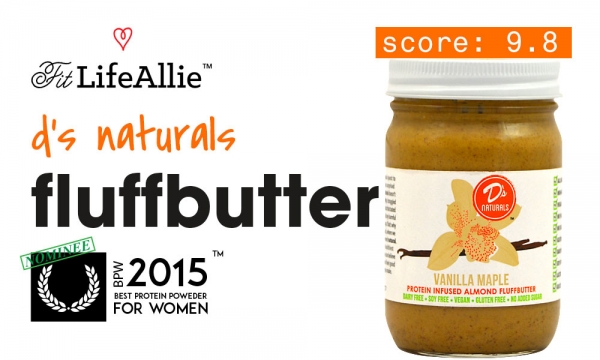 I guess a good place to start would be with a brief overview of what I know about this company. D’s Naturals makes non meat-sourced protein-dense snack products like bars and butters. While I do have a protein bar section of reviews on my site, I actually wasn’t sure where to put this one, since it is such a different product than I am used to reviewing! So I am making an entirely new section devoted to nut butters. Pretty crazy, right? So tomorrow I’ll get my hands on some more and actually end up doing a ‘top protein nut butter’ section on the site. I really think protein infused butters are poised to become the next big thing in sports nutrition, and I’d be thrilled to help you figure out which one is actually the best. So back on topic. Geez I’m so focused today- no ‘that’s what she said’ jokes or ANYTHING yet! Let’s change that. LOL. How about not, you’re thinking! HA. Ok. So I came across D’s Naturals on Twitter randomly (I know, right? Like who even uses Twitter anymore?) when an unusual post came across my news feed. I saw the words ‘protein’, ‘nuts’, and ‘butter’ in the same sentence. And it wasn’t even in a text from my boyfriend! (LOL THERE we go).

But seriously. I was super interested of course to see that there was yet another product in the healthy protein nut butter arena. I know Buff Bake is the Queen Bizzle of the space at this point, so it’s always fun to see the competition start to come out of the wood works and create a good bout. It’s not unlike watching a fight unfold. Just follow the companies on Insta and watch them duke it out!

So D’s Naturals is a super interesting brand to me because after doing some research on them- it looks like it is the brainchild (ironic word choice) of a legit 18 year old boy named who goes by the title ‘D-Katz’. Awesome name. This kid is some kind of genius because his nut butters are already in Vitamin Shoppes and Whole Foods all around the country. Like. Why can’t I just start a company! Ugh! I hate all these successful people! LOL. But, yeah, once I found out that he was in Vitamin Shoppe, I made a point of stopping in to see if I could find the product. And wouldn’t you know it, there was one lovely jar of D’s Naturals sitting there just waiting to be plucked! To my delight it was the vanilla maple flavor. Let’s take a minute and talk about this flavor.

Hashtag HOLY you-know-what. THIS STUFF IS UNREAL! I sincerely mean that, and if this fluffbutter was a person I would marry it and never let it go. Like. You have no idea how unbelievable this product is and I really really really want to share this experience with all of you because it’s truly on another level. As my favorite Guy Fieri would say- this nut butter is ‘OUT OF BOUNDS’.

As I mentioned, I got the maple vanilla ‘protein-infused almond fluffbutter’. Which, first of all, is an absolutely brilliant thing to call something that you want people to put in their mouths. Or that you want to put in people’s mouths. Whatever one sounds dirtiest use that one. But I will put D’s Nut (Butter)z in my mouth all day everyday- such is the taste.

If I had to describe the taste- I think the primary word I would use to describe it would have to be…hm…explosive. Explosive isn’t always the most graceful word to use when describing something that you like- but once you try it I think you will understand. From the moment that this fluffbutter enteres your mouth- it’s like an explosion of tastes erupting into one melodic harmony of taste in your mouth. The maple AND the vanilla are both totally there from the first bite- each one cascading over the other to fight for primary flavor position on your tongue. Speaking of cascading- the consistency of Fluffbutter is also something we need to talk about.

The consistency alone of this Fluffbutter is other-worldly. I think that’s the biggest comparison that I’m going to make when I talk about Fluffbutter versus Buff Bake. Buff Bake is TOTALLY 100% a nut butter, through and through. What I like about D’s Natural’s No Cow Fluffbutter is that it’s a product all to it’s own. It’s like it started as a nutbutter, but then went through a blender with a bunch of amazing flavors, and a cloud, and some magic dust. And out came Fluffbutter. It’s lighter than a traditional almond butter, in the best way possible. So that’s what it TASTES like went into this delicious mixture. Let’s look at what ACTUALLY is in this delicious mixture.

The recipe that Mr. Katz cooked up for his Fluffbutter is actually super simple. It is a combination of just  ingredients. Just 8! That’s pretty pure in my book. It’s also far less than you would think goes into a product that has THIS much flavor. I honestly expected to flip over the jar, and see a host of un-pronouncable ingredients staring back at me. Not the case with Fluffbutter. All that is in here is:

And that’s all! Pretty impressive if you ask me. I think that the nutrition facts are also quite impressive for something that tastes this freaking good. Per each 2 tablespoon serving, you are getting 200 calories (ok, it’s a nut butter- it’s GOING to be pretty dense, calorically speaking), with 140 of them being from fat. Just 1.5 grams of saturated fat are included, and a reasonably low amount of sodium at 105 mg. There are some carbohydrates from the almonds, with 2 of those being derived from fiber. The cool thing about this product though, is that with each 2 tbsp serving, you get a WHOPPING 11 grams of protein. That’s almost double what you would get from a regular nut butter- and about half of what you would get from a protein shake. That’s pretty impressive in my opinion. Like. Really impressive. Basically everything about this product is impressive. Of course there is ONE tiny thing that you should be aware of, however.

D’s Naturals Fluffbutter Side Effects: Ok I’m being a little dramatic. I say ‘side effect’ as if this is a pharmaceutical drug. It is not. And the ‘side effect’ could be as much to do with me personally as it is with the product. But hear me out. If you eat enough of this stuff- like in the realm of 2-4 tablespoons- you might get a little queasy. Now I was not, like, super sick to the point where I felt like something was wrong, but I did just feel a little bit like my stomach was on edge. Just a little. queasy. I think that is because of the significant amounts of xylitol (sugar alcohol) that is in here to assist with the sweetening aspect. I get this feeling from Quest bars too sometimes. It’s nut unbearable- just kind like, that ‘ugh’ feeling. But still. I would say just eat it in small doses and you’ll be fine. Let’s talk about the packaging, shall we?

I’m giving D’s Naturals something just short of awesome on the packaging side of things because I really do think they could have taken their game up a notch to get a better design score in this D’s Naturals Fluffbutter review. The product does not look ‘bad’. It is quite simplistic, really. And in being simple it is a nice match for the product overall. You get the sense that the product is natural, and free from complex formulas, crazy preservatives, etc, etc. Right? But in being super simple, I think D’s Naturals has just left out that certain something that sets it apart from the competition. I mean. This product is so good that even a little bit of flash, or a little more creativity could have turned this product from a hidden gem- to a GAME changer. So spice this thing up in the looks department, D’s Naturals! I’m calling you out! LOL.

What we have here is a game changer. The labeling will change for the better- I’m sure of it. But it almost doesn’t even matter if it does. I really don’t think you can keep a product this good hidden for too long. People are going to start taking notice. And I’m happy to see where they go from here. Thanks for checking out my Flufflbutter review!*