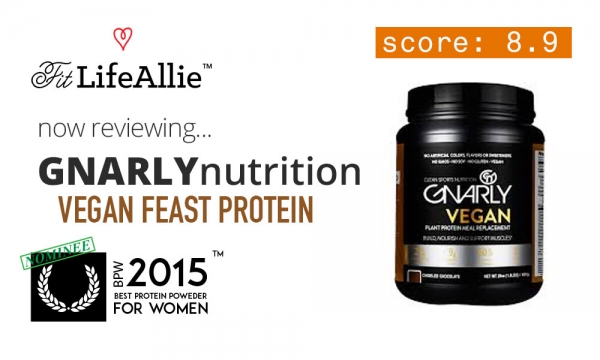 Gnarly Nutrition made it’s way into my life last week when one of my best friends forever told me about their products. I immediately knew I had to do some fun Gnarly Reviews for you guys! And what better way to start than with the product that Megan allowed me to try first (she has the entire stack so  didn’t even have to buy it myself!). This Gnarly Nutrition Vegan Feast protein powder review will be all sorts of fun. It will be four ways of fun. What does that mean? It means that we are going to cover off on four different elements of this Vegan protein powder that will give you the ultimate overview of what Gnarly Feast is all about. This protein powder is going to go fully under the careful eye of Fit Life Allie, and that means we’re going to talk about the taste, the formulation, and even the packaging to create our final determination on if Gnarly Nutrition Vegan Feast is worth a shot and deserving of consideration for our next Top Ten list. I am so excited to start trying more Gnarly products after my experience with Gnarly Vegan Feast- and let me tell you why!

Vegan Feast protein by Gnarly Nutrition. Who. Named. This. Like. Laughing my ass off. Gnarly Nutrition? Ok. So here’s what we know right off the bat. The ‘Gnar Czar’, who HAS to be the owner of this company, is clearly a ski bum. And by ski bum I mean ‘skitrepreneur’ because he/she has created this big beautiful company that we now know as Gnarly Nutrition. I know. I’m reading WAYY too much into a supplement company. But that’s what I love to do people. You know this. Lol. But getting back to that NAME. Like. Gnarly Nutrition? Who are you selling to? Skiers and surfers only? I wonder if there’s a big enough market for them to get that crowd on board. Actually I bet there are. It’s like the GoPro crowd. Actually, you know what!? That’s exactly what this brand reminds me of! It seems like they are actually the GoPro of the nutrition space. Which, is kind of genius since GoPro is straight crushing it. But anyways. Y’all aren’t here to hear my babble about Gnarly’s branding all day. Let’s jump into the meat of the review and talk about Gnarly Vegan Feast flavors.

Megan does it big. When she buys something, she BUYS something. And. Like. ALL of something. I think she had every product in every flavor that Gnarly makes sitting on her kitchen counter when I went over to her house for wine night the other evening. The other girls were giving her so much crap and saying that her kitchen counter looked like a Vitamin Shoppe. And then Willet said ‘uh no it just looks like Allie’s kitchen’. I was DYING laughing. But needless to say, I made all the girls turn that kitchen into a protein shake factory so that we could try all three flavors of Gnarly Feast.

So which Flavor of Gnarly Feast is Best?

I think that the best flavor of Gnarly Feast is the chocolate. You guys know that berry never suits my fancy when it’s a protein shake. I just don’t get enough of that ‘dessert’ craving knocked out with berry protein shakes. But the Chocolate was actually really tasty for a VEGAN protein. Now. Vegans. Y’all are about to jump down my throat but you KNOW most of y’alls protein powders taste lousy. I have never found a VEGAN protein that can hold a candle to how a traditional whey tastes. But I think there are different levels of ‘terrible’. Gnarly Vegan protein is pretty dang good as far as vegan proteins go. The chocolate is relatively sweet and ‘real’ tasting, although I would like to see them add even more sweetness and work on the consistency.

The vanilla Gnarly Vegan Feast is second place for me. It’s a little bit sweeter than the chocolate, which I like, but I don’t like how the pea protein flavor starts to break through that vanilla taste. The chocolate does a better job of staying ‘chocolate’ flavored from start to finish.

Like I said before, the berry flavored Gnarly Nutrition Gnarly Feast is the worst of the three. BUT, when Alex made me her version of it, I liked it a lot better. She also loaded that puppy up with like an entire cup of berries and whole milk too. So. That sort of defeats the purpose of having it be VEGAN, doesn’t it? Lol. But yeah- the berry on it’s own is not very good. Go with the chocolate, trust me. I’ll give this protein an 8.8 out of 10 on taste though. Which is a true accomplishment for a VEGAN protein. Well done, Gnarly.

The formulas of the VEGAN protein powders are always kind of fun. They usually start with a base of brown rice, or pea, or some other sort of vegan source, and then build onto it from there. This one in particular includes an interesting vitamin blend that clearly is designed to create that ‘meal replacement’ element to the formula. This formula reminds me a whole lot of the Vega Sport products, and I wouldn’t be all that surprised if they are mae by the same exact factory. But in terms of macros, there are a few interesting things to note.

The first notable callout in terms of formula and macros is that the overall calorie count is 200. That’s about double what I’m used to seeing. The funky thing is that the protein amount is still 20 grams- which means 80 of the 200 calories, or less than half, are actually coming from protein.

So those are my thoughts on macros. Granted NO protein powder is really that perfect in terms of the nutrition facts, so I’ll still give a B on this criteria. The ingredients used are Pea, Chia, and Cranberry protein- which is super creative in my opinion. I’ve been hearing about the benefits of cranberry protein for quite some time now, and I think this is actually one of the first vegan proteins to utilize it in a meaningful way. The same for chia now that I think about it…

Other than those main ingredients, you have some various flavoring and texture agents, along with all the minerals to derive the vitamin content. I personally would prefer a more bare bones strategy more along the lines of what Clutch Bodyshop did with their protein. But this one is pretty good. Let’s talk packaging.

So. I’m going to keep it real Gnarly here. Gnarly Vegan Plant Protein Meal Replacement needs some work in the packaging department. Look. I get that they want to look like GoPro. I really do. And GoPro is a great company to emulate. But. I don’t want to drink a GoPro. I REALLY don’t. This vegan protein is a pretty sound product from the inside, but they should have made the outside more closely aligned to the inside. The outside is just too plain and too ‘status quo’ aka normal for a company that has so much different about it. I mean. Spend the extra money and have this stuff designed to look like it belongs on the shelf of Whole Foods, not the shelf of Bodybuilding central. It comes down to knowing your audience, and I just think a snowbunny like me would rather buy something that looks less intimidating and less like a hardware company than the current look. But. They’ll sort it out. I do like their products and I’m excited to see the revisions that they make to the labeling once they read this. I’m always accepting paypal donations guys ;)

You laugh but you would be amazed how many companies read my reviews on their style and then totally overhaul it. It’s quite flattering, really!

Gnarly is certainly one to watch in 2016. I’m not a huge fan of vegan proteins in general, but I AM a fan of Gnarly Vegan feast. That should tell you all you need to know about the type of products Gnarly puts out. The value isn’t ALL THE WAY there for me at $60 for only 16 servings, but I don’t really have a problem paying for quality, so I’ll keep them in the ‘B’ range on value. Up next- the Gnarly Pump pre workout!*