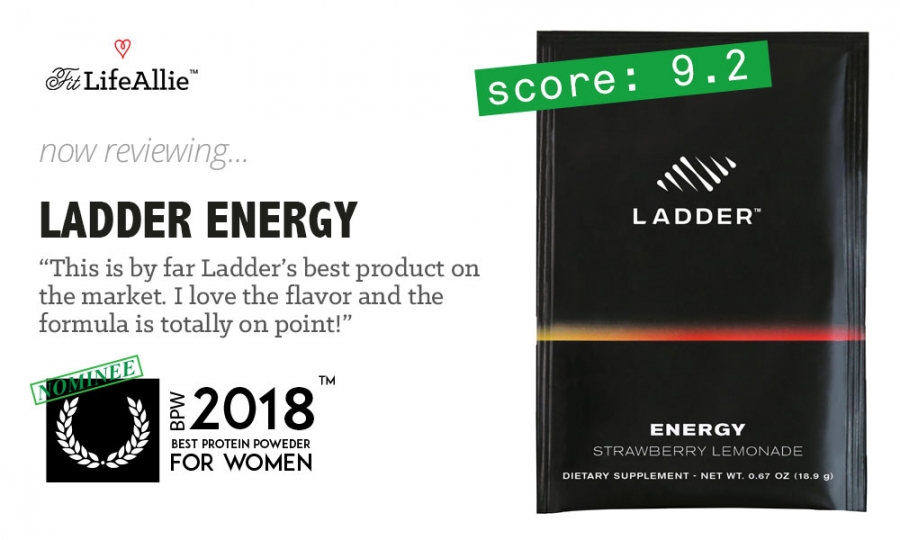 Ladder Energy is the newest pre workout that I’ve tried and in the next several minutes I’m going to compile all of the info I’ve gathered over the past few days of trying this product to give you the full run-down. What does Ladder Energy do? And what’s in it? How is the flavor? These are all things that we are going to dive into in this review. Let’s get things started.

Ladder is the biggest sports nutrition brand to emerge in the last decade, without a doubt. I think Ghost was the only other one in recent memory that clearly had THIS much obvious financial support, THIS much hype, and made this much of a splash right out of the gate. Obviously these are the types of brands that I love diving into with reviews. I have already dug into both of their protein recovery products (plant-based Ladder review here) and (Ladder Whey Review Here). But as you guys know, it is really the pre workout that gets me excited. These energy boosters are what I have been reviewing for the better part of 6 years. And aside from a few fun releases in the last couple of years (namely Alani Nu and some good stuff from Ghost and UNICO), there haven’t been a great deal of truly great pre workouts. I was hoping that Ladder Energy could be the first in a long time to break through as a bright star in my pre workout review section. Let’s jump right into things and talk about flavor and formula!

Okay so. You guys know that I love berries. And I do love me some lemonade. So while Ladder isn’t the first company to come out with a berry lemonade flavor- they have done a pretty darn good job at creating a delicious interpretation of the classic. I think that this flavor had really nice authentic berry flavor, and just the right amount of acidity from the lemonade. There are a few sips that you can definitely taste some of the bitterness that Ladder tried to overcome, but really they have done a nice job. Ladder Energy is sweet and tart and tasty. So. So far so good! Ladder Energy goes down easier than Margaritas on a Monday. (Not that I know what that’s like LOL). Alright let’s talk about how this stuff actually works!

NOTES: That’s a pretty stout formula in my opinion. You have good old fashioned creatine monohydrate leading the way, followed by beta-alanine and betaine. Even though creatine monohydrate isn’t my favorite form of creatine, these are exactly the types of ingredients that you want in your pre workout. Creatine is known as the kind of performance enhancing supplements for it’s ability to increase turnover rate of ADP into ATP. It dramatically increases strength and endurance. Speaking of endurance, that’s exactly what Carnosyn Beta-Alanine does, by increasing muscle carnosine levels. As for the rest of the ingredients, betaine enhances strength, while the other ingredients improve mental energy and focus. Overall I really respect this formula. My own quip is that the creatine monohydrate does sometimes leave you feeling (and looking) a bit puffy and bloated. So ladies (and men) just something to keep in the back of your mind. At 5 grams you are looking at a really serious dosage as well. But still. Creatine is good stuff. And you can tell this formula is a gem by the way it makes you feel in the gym. Here are my workout results from my Ladder Energy trial days...

Okay with 5 grams of creatine, you are bound to get some gains from this pre workout. But guys. I’m telling you. Ladder Energy really kicks! And not in a cracked-out, stimulant-heavy way. I mean Ladder truly makes you feel stronger and that you have more capacity for your workout.

I have tried this Ladder Energy product on two occasions now. The first occasion was before an ill-advised heavy power lift that I tried to squeeze in before I flew home for Christmas. I was running a little short on time but I knew I wanted to try to get a workout in. I threw on my Metcons and set about warming up with some cleans. The first few sets went down easy. Not really because of the pre workout but more just because I hadn’t done jack squat for a few days. So my workout was going great.

It wasn’t until sets 4 and 5 that I think I could really feel Ladder Energy starting to kick in. It was during those heavier sets when my muscles should have really started fatiguing that somehow I was starting to get stronger. The weights were moving faster. The breathing was still easy and strong. My muscles just felt like they were firing on the perfect cadence with each rep. I attribute it not only to the physical enhancing ingredients like betaine and creatine but also to the mental ingredients that were keeping my brain firing clearly. It’s really a nice feeling to sense that everything is just in sync. Anyways. I ended up having a great workout with Ladder Energy until I pulled a muscle in my back. Did Ladder help give me a little overconfidence? Maybe. Lol. But still this pre workout does work great. Let’s chat about a less important aspect, but one worth discussing never-the-less. The looks.

I don’t know what ‘the part’ necessarily means, but I know Ladder Energy doesn’t have it. It is convenient as heck, but there is just something that I don’t quite like from a packaging standpoint that makes Ladder seem just less high end...almost like my mind sees it as lower quality because the packaging is so drab. It’s not a reason not to buy, and just like your Mom said, looks aren’t everything, but I don’t think that this pre workout does itself any favors in the appearance department. Let’s summarize.

-Ladder Energy comes in an absolutely delicious strawberry lemonade flavor that I enjoyed a great deal.

-Ladder Energy has a handsome formulation anchored by creatine monohydrate, beta alanine, and betaine anhydrous. Some cognitive ingredients round out the formulation.

-Ladder’s pre workout does provide fantastic results in the gym. Strength and cognition are the most notable areas where the improvement is evident.

-Ladders packaging overall is not particularly glamorous, but since it is packaged into single serving satchets, it is undeniably convenient.

So what is the verdict? It’s simple. Ladder’s Energy product is expensive, but unlike the protein powders, Ladder Energy is actually worth the price tag. If you have the dough and are looking for a high-end, reliable pre workout booster- Ladder might be for you.*