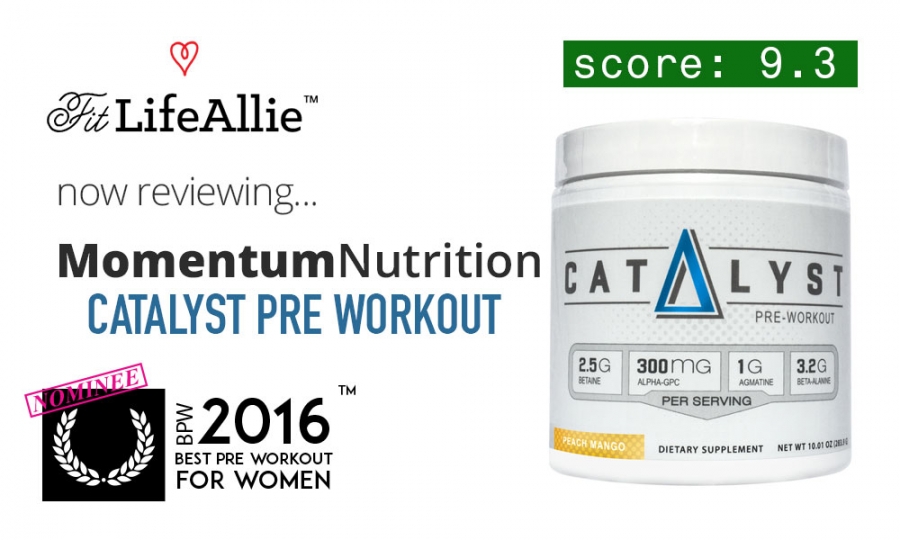 What is Momentum Catalyst pre workout and who is it good for? That’s what I’m going to answer for you in this, my second Momentum Nutrition product review. There are a things I know about. Pre workouts happen to be one of them. And when I tell you I know about them, let me be very clear. I REALLY know about them. This is my ninety-seventh pre workout review, and you can be assured that I know my stuff by now. I mean. How can anyone even argue with me at this point? I’m SO close to a hundred that I can taste it. Speaking of taste- that is one of the important factors that we’ll discuss in this Momentum Catalyst review. I have found this product pretty enjoyable in that regard. But does it work? Well. You’re in luck because I’m going to cover that as well! I’m even going to cover off on the supplement facts, and and even the packaging by the time all is said and done in this Momentum Nutrition Catalyst Review. So if you’re ready for a super-fun, super-entertaining pre workout review, I think you and I are going to get along just fine over the next hour. Let’s jump in.

Momentum Nutrition isn’t the first ‘small-time’ company that I’ve chosen to review, and it won’t be the last. I’m starting to really enjoy working on these smaller companies because they seem to have more character versus something bigger and more ‘mature’ like a Muscletech or even an Optimum Nutrition. Now as you know from my Momentum Nutrition Formula 56 review, I’m already kind of a Momentum Nutrition fangirl. While I wasn’t crazy about the packaging, I did actually lose some fat over the two week stretch that I was taking the product. So you can bet when I found out about their pre workout Catalyst, I was pretty jazzed. So. Is it as good as the fat burner. Let me tell you. Starting with the taste.

Sort of a ho-hum start for for Catalyst. The flavor that I tried was peach mango, and it was, well, a pretty good flavor experience. It wasn’t something where I felt compelled to snapchat everybody that I know about it, but I thought it was very drinkable. With the peach mango flavor, I think they could have actually named it ‘mango peach’ instead, because what you have is a product that starts out with a ton more ‘peach’ taste instead of mango. There are definite notes of peach, don’t get me wrong, but what hits your taste buds FIRST is certainly the mango. I liked how this pre workout mixes. There aren’t any clumps or anything like that to speak of, which is rare for pre workout. Usually you have some mixability issues where there seems to be a frothy sort of texture at the very top. But Catalyst was not like that. If I had to recommend a change or two to Momentum, I would say that they should have added just a TOUCH more sweetness. I think the level of fruit and the level of sour were on point, but could’ve been bumped up just a little bit to make for a more balanced taste. Speaking of balanced. Let me tell you how the product worked out for me in the gym.

Ok now we are getting somewhere. Catalyst performs ‘above the line’, so to speak. That’s the term we use for a product that stands out from the pack on it’s performance. You have a product in Catalyst that give really nice, smooth energy, while ramping up focus and definitely improving endurance as well. I think there are products out there that beat out Catalyst on endurance, but I think when you take in ALL elements of how Catalyst performs, it comes out very near the top for overall performance.

I took Catalyst before doing a sort of hodge-podge workout consisting of a one mile (sprint), a few stretches and some ab work, and then another one mile sprint. I think for weight-training I would have had an even BETTER experience with Momentum Nutrition Catalyst. But I’ll have to save that for another time. Like tomorrow. But really a one mile sprint is a high enough intensity level for you to get a really good idea of what this pre workout can do when it comes to performance. I loved how good I felt right from the get-go. I felt like I could have really conquered just about anything at that moment. Just like Formula 56, Catalyst does a really splendid job of boosting your energy and focus levels to a place where they probably have never been. I love how strong mentally I became, and how I was literally able to knock out my mile run super quickly. I loved it.

I think the only thing keeping me from really bumping Catalyst pre workout up into the ‘A’ range in this section would have to be the endurance. It didn’t disappoint me in this regard, but I honestly was hoping for a little better. If you do end up giving Catalyst a try, I would probably advise making sure you get some good pre workout calories to boost up the endurance effects. But let’s see what ingredients are in Momentum Nutrition Catalyst to give it the positive effects.

Another ‘ALMOST’ grade for Catalyst. But. Nothing to be ashamed of in the least. You guys know I am literally the toughest supplement critic in the world when it comes to pre workout. So a sliver below an ‘A’ is actually something to take great pride in. Here is the full list of ingredients in Momentum Nutrition Catalyst:

The last thing to note on ingredients is that their ARE some artificial flavors and sweeteners in the product. But really I don’t think it’s a big deal. For me personally do I try to LIMIT the artificial stuff? Sure. But when it comes to pre workout, a little sucralose isn’t a huge cause for concern for me. But let’s talk packaging now.

Ok I don’t want to seem like TOO much a broken record here, because I know this is something we did flush out pretty thoroughly in yesterday’s Formula 56 fat burner review. But this product suffers from something that I like to call packaging boredom. BUT. I did give Catalyst pre workout a slightly higher grade than it’s fat burning family-member because I think Catalyst is visually at least a LITTEL bit better-looking than Formula 56. Here’s something to notice about Catalyst packaging. THere’s a big fun triangle that’s blue. Lol. But no really, look! It’s kind of cool. I suppose in the world of the blind, the one-eyed man is King, and I think I may be damning by faint praise, but since the rest of the label is SO boring, the blue triangle is at least SOMETHING to look at and stimulate the eyes. Lol. Stimulate the eyes. That sounds weird. But it’s true. My eyes are stimulated by it. I think the little gray boxes with their ingredient amounts are also notable. Not incredibly good-looking, but at least notable. They need to make their flavor callout better. I don’t know how, but a colored box isn’t enough. So. Overall just too plain, but maybe that’s what helps Momentum differentiate itself as the cleaner supplement brand. Le’s wrap things up.

I think Momentum definitely has reason to be excited about where their brand is going. Their pre workout works well even if it looks awful. The price is SUPER fair at just about a dollar per serving. I just really enjoy this pre workout in every way. Lovely. Just lovely. Give Momentum Catalyst a try, people.*