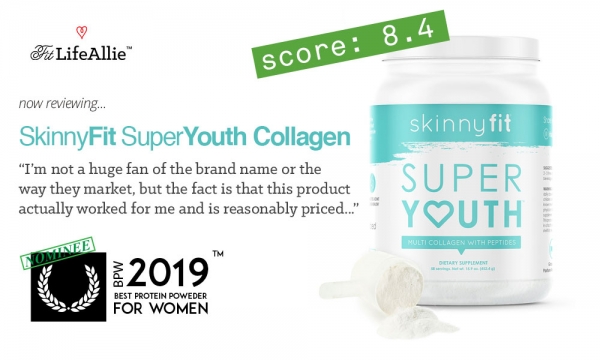 SkinnyFit SuperYouth reviews are all over my instagram lately so i figured I would do us all a favor and put together my thoughts on this flavorless powder. In this review I’ll tell you if SkinnyFit SuperYouth works and if it is worth a try. We’ll go over the flavor, the ingredients, and then the packaging before assigning a final review score and making our final determination. I will also look at how SkinnyFit compares to some of the other collagen products that I’ve tried. If that sounds like a good plan to you, let’s get cracking on this SkinnyFit SuperYouth review!

SkinnyFit is one of the most popular new collagen protein brands on Instagram right now. I scooped up a jar (see what I did there? Lol) to see if it actually works. I have been taking it for 2 weeks and will let you know what benefits and/or side effects I experienced while taking SuperYouth collagen. But before I share my results, let me go over the packaging and then ingredients first.

SkinnyFit SuperYouth Packaging Could be Better…

SkinnyFit is a stupid name. Whoops did I say that out loud? Yep I did. I really did. I think SkinnyFit is such a closed-minded name that bodyshames those of us who are NOT particularly Skinny or Fit. So I know this is a harsh way to start my SkinnyFit SuperYouth review but guys- I just can’t stand for these brands anymore that just try and sell us on some perfect idealistic image of what a WOMAN should be. It’s literally so sexist and unfair to women everywhere. So as you can tell- I am NOT a fan of SkinnyFit SuperYouth collagen from a branding perspective. Sure the jar looks cute enough, and yes everyone loves hearts so the fact that they swapped a heart in for the ‘O’ in ‘Youth’ is cute. And the teal color is cute. But I just hate this name. I hope they change it. Another final critique on packaging is that I wish they used a more sustainable packaging option. Companies like YourSuper (they use recyclable jars), and Tropeaka (stand-up bags) are setting a good example for sustainable packaging that reduce the companies’ carbon footprint. So I think SkinnyFit could take a page out of that playbook.

The ingredients in SkinnyFit’s collagen product are fairly straightforward. There are several different kinds of collagen, some bone broth, and then, well, nothing else. That’s it. Lol. Let me list out the full ingredient list for you here:

NOTES: So, like I said, this is a slightly more complicated than some of the other collagen products (like vital proteins) that I have tried in the past. SkinnyFit SuperYouth uses not just the bovine collagen (that means from cows), but they also use bone broth protein (also from cows), along with some marine collagen (from fishes!), some chicken bone broth, and even some eggshell membrane collagen. It’s a pretty unique formula, but notice that it is in a ‘multi-collagen complex’ meaning of the 7.8 grams included, we actually don’t know exactly how MUCH of each of the individual ingredients are in this product. So for that reason I am a little skeptical on how much, for example, marine collagen is actually in here versus something like the bovine collagen. It’s just interesting.

From a macros perspective, in one scoop you get 30 calories, and 7 grams of protein. That is pretty standard for a collagen product to have it be low calorie like this. One final note on ingredients is that there are NO flavoring ingredients. So this collagen is actually very clean from that perspective. It just doesn’t taste like anything though so I was putting it in smoothies and stuff.

The SkinnyFit team claims that their SuperYouth collagen does the following things:

That is a pretty lofty list of benefits, if I don’t say so myself. As for which of them I actually experienced, I will say the following:

What to ACTUALLY Expect from SuperYouth Collagen:

Better Skin: This one is actually legit. My skin during this time of year is VERY dry and prone to breakouts. About a week into starting SuperYouth I actually was seeing some benefits for my skin. My breakouts were smaller and less frequent, and I did notice my skin felt softer. My boyfriend said he noticed it too.

Joint Health: You guys know from reading my blog that I do have knee issues from softball so many years ago. Since starting SuperYouth I have actually been able to do my full bootcamp relatively pain-free. It still is there a little bit but I do think the collagen has helped.

Hair and Nail Health: I’m not REALLY sold on this one yet because I also take a multivitamin that has a good hair / nail support complex…but I think my nails have been growing maybe a little bit quicker since I started taking SkinnyFit SuperYouth.

SuperYouth vs Vital Proteins: It is difficult to TRULY compare which is better between SkinnyFit’s SuperYouth and Vital Proteins collagen (which I have reviewed here on the blog: read my Vital Proteins Review here) because Vital Proteins does not make a comparable product that has the different types of bone broth, marine, egg shell membrane, etc. So they are just very different products. I have only tried Vital Protein’s basic bovine hide collagen. That being said, and admitting that this is NOT an apples to apples comparison, I think I have had better results with SuperYouth. But that is just me. I think the bone broth proteins helps my body. But definitely keep THIS in mind too:

While I did not experience this dramatically EVERY time, I definitely found the SkinnyFit SuperYouth to be a little bit harder on my stomach than some other collagen proteins. But keep in mind that I have a hard time with egg products so I think the eggshell membrane ingredient in SkinnyFit SuperYouth was harder on me specifically.

Overall I will give SuperYouth an 8.4/10. I think it is a good product for a reasonable price despite it’s shortcomings. Here is my review summary:

- I am not a huge fan of the SkinnyFit SuperYouth brand name or packaging, and I wish they used sustainable packaging

The bottom line? SuperYouth is obviously trying to target a ‘certain’ demographic with their branding and marketing. I with-held a lot of my judgement on that front, but as you could probably guess from my scathing review of their brand name, you can guess I’m not a huge fan of the way they market either. But that aside, I do think SkinnyFit SuperYouth is a decent product, and it did actually work for me. So. I’d say give it a shot.*