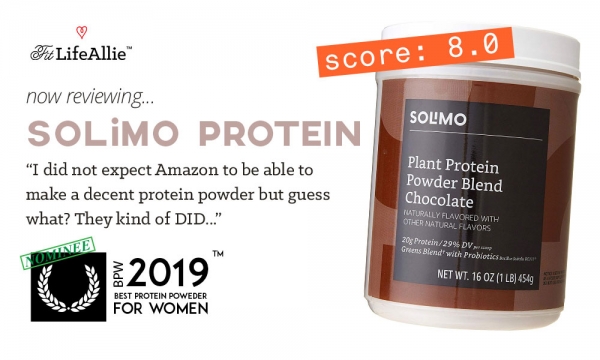 Solimo Plant Protein Powder Reviews are easy enough to find on Amazon, but it’s sort of difficult to trust what Amazon tells us on their site because, well, Solimo IS an Amazon product! So they could easily just be in control of those reviews for their own good. In this review I’m going to do my best to be non-partisan, and give you really good read out on this plant protein from the inside out. In this Solimo protein I will tell you all kinds of things. The first thing I will tell you is if this plant protein tastes good. I tried the chocolate and vanilla flavors of Solimo and so I’ll do a really good comparison and tell you the best flavor of Solimo plant protein. The other thing I’ll focus on mainly in this Solimo review is the ingredients and nutrition facts. I will share my thoughts on the formula and if it’s a high-quality product. I will close out the review with a discussion on the packaging and then I’ll round it out with an official BPW score and recommendation. Let’s begin by talking taste!

Solimo protein powder is, if nothing else, one of the strangest NAMED protein powders that I have tested in a long time. I’m trying to think of another product that had a name this weird and I don’t think I can. Actually you know what - Katy Hearn’s “Alani Nu” is a pretty strange name too. I did love that protein btw you can check out that review here.

But name aside- let’s talk about Solimo from a flavor standpoint. Does it taste good? And what is the best Solimo flavor anyways? Let’s find out:

So I grabbed a 13 seving jar of the chocolate Solimo and a tub of the vanilla Solimo as well. Here is what I can tell you about each flavor:

Chocolate: I found the chocolate flavor of Solimo protein to be very mild. I found that it lacked much depth to the flavor, and could have also benefitted from some additional sweetness. I didn’t mind this Solimo protein from a textural standpoint, although I do think it could have been a little better. But that’s what I say about most vegan proteins! But yeah I would give Solimo about a 7 out of 10 on the flavor. It’s okay. It’s good but definitely not mouth-watering. Let’s look at the vanilla flavor.

Vanilla: I think the vanilla flavor of the Solimo Plant Protein Powder Blend is slightly sweeter than the chocolate, and might have just a little bit more purity to the flavor. I actually kind of enjoyed the taste of this one. Again- it IS a plant-based vegan protein powder so it’s not going to taste anywhere near as good as some of the top dairy-based proteins, but overall it’s not so bad. I found the texture to be similar across both flavors.

To summarize - I think Amazon actually did an okay job flavoring these plant-based protein powders. They didn’t knock the socks off, but for Amazon? Sure. This is a decent effort for a first time in a tricky industry. As far as the best FLAVOR between the two, I would go with the vanilla. Vanilla is sweeter and has a more authentic vanilla flavor and so the best flavor of Solimo protein is definitely the vanilla. Let’s look at the formulation and ingredients now:

The ingredients in Solimo are not exactly what you would expect. I was expecting something that was extremely minimalist. Something very simple. That is not the case. This protein is comprised of ingredients that I recognize, but also a few of them that I was not expecting at all.

What I Don’t Like About the Amazon Solimo Plant Protein Formula:

The core of the formula is pea protein, which I did expect. So let’s start there. One thing to keep in mind with Solimo protein is that pea protein is not going to give you the optimal balance of amino acids that you need. That’s the main knock on all of these Vegan protein powders. They often times don’t have the balanced amino acid profiles that you can only get by combining several (often expensive) vegan protein sources. So that’s already my biggest critique of this product from an ingredient standpoint. It’s not that great under the hood because of the lack of varied plant protein sources.

The other thing to note here is that there is some maltodextrin in this formula. Maltodextrin is a filler with no nutritional value. So I think it was included to cut some costs here. I also see cane sugar on the label here. That’s not a deal breaker, especially since there are only 3 or less grams of it included, but I figured I would call it out anyways.

But it’s not all bad in terms of formula here. Let’s look at some of the positive inclusions in this formula- starting with Broccoli powder, kale powder, and spinach powder. I do like that this protein has some greens in it to give it added nutritional value. Keep in mind that there is not very MUCH of each of those included, but nevertheless it is a positive.

Other ingredients in Solimo protein are mostly for flavoring and texture. There is monk fruit, dried blueberry, stevia, and dextrose.

A final comment here on the formula is that Amazon Solimo protein has probiotics contained in it as well. That is a really important add-in, and one I was not expecting from such a cost-focused product. So this is another positive for Solimo.

In terms of macronutrients, Solimo is a fairly straightforward protein powder. Here are the standard macros:

NOTES: The twenty grams of protein powder are impressive and stout. I was surprised that Solimo had this much protein per serving because the texture is not overwhelmingly chalky.

The sodium content at 290mg is actually a little bit more salt than I would have preferred but it’s not a deal breaker.

Same with sugar- 3g is a little more than I would have liked, but it’s not a terrible amount. I can live with it.

Overall I will give the Solimo Plant Protein an 8/10 on the formula. I don’t like that it’s primarily just a pea protein, but all things considered it is not so bad. Let’s finish up the Solimo review with an analysis of the packaging.

Solimo Packaging Is Not Very Impressive.

Solimo is a pretty sound product on the inside, but there isn’t much to love on the outside. I think the white plastic jar is both wasteful and unbecoming, while the label itself- from the name to the bland graphical design, leaves very much to be desired.

The Solimo Plant Protein packaging reflects an unimpressive effort by Amazon to make their plant protein stand out for it’s looks, which, honestly I didn’t expect them too. And that’s because this product costs just $13 for an entire tub! When you look at the packaging, it all makes a little bit more sense. $13 is so cheap for a protein power that Amazon must be making very little to no money on it. But anyways. The point is, that this packaging is not great. Let’s wrap up this Solimo Review.

- Solimo tastes just about average as far as plant proteins go. The vanilla flavor is superior to the chocolate flavor when it comes to which Solimo flavor is best

- The Solimo formulation lacks variety in it’s sources, which means it does not have a very good amino acid balance, however, the addition of probiotics and vegetable powders give it a boost in my opinion

- Solimo Plant Protein Blend packaging is not very good, but I didn’t expect it to be since after all, Amazon designed it

In summary, value is value. And while the Solimo Plant Protein leaves very much to be desired in terms of the flavor and some elements of the formula, I did find that this product exceeded my expectations in several ways. I will give it a sound 8/10. Not bad at all.*